It has been 4 months since I last blogged here. I’ve been battling with whether to continue writing; wondering whether what I have to say is longer relevant – thinking that this platform is no longer beneficial to anyone; doubting myself.

Writing has always been my therapy, more so since Otis died.

I have shared the sad, the downright devastating and the most honest, raw parts of my grief here … from describing my labour and birth in great detail, to admitting I have sat beside my son’s grave on my hands for the overwhelming urge to hold him again.

I have shared my grief while I have been sat uncontrollably crying in my car at night, just outside the baby garden where Otis is buried; and also while I’ve been sat feeling peaceful and content at home.

I had the urge to blog today, not for a special reason, not because I think that this piece is powerful or ‘needs’ to be heard – just because in a moment of reflection earlier today, for the first time in the 21 months since my little boy passed away, I imagined his coffin at the front of the church during his funeral service and I smiled.

I smiled, at something I thought I would only ever feel great sadness.

I have been asked a number of times since Otis died why I chose to have his funeral service in a church, being honestly upfront about my non-existent religious beliefs. Truth be told, a question I can understand being asked ⛪️

There are multiple reasons why I decided for this to happen … The main one being that I knew I would need time between seeing my son’s coffin for the first time & it being lowered, with him in it, three feet underground. I also thought that having the service in a church and having to travel from there up to his burial site would somehow make it more real, give me more closure.

An additional reason, and one that has since come to be of huge importance to me, is my love for old buildings and churches – the history of the love inside the walls reflected in the peace and calmness I feel when I walk into one.

These 4 walls have seen so much love: from weddings and christenings and funerals, to

remembrance services, choirs singing and annual Christmas Eve gatherings. We didn’t want a “big” gathering for Otis. The most important thing for us is that his service and burial was dignified and meaningful. Because of that, it consisted of three of the most prominent things in our lives: LOVE, words and music.

The religious aspects of his service were kept to a bare minimum, with only one prayer being said to wish him a safe journey. I wrote a letter for him that was read out by the vicar, the girls lit a candle at the front of the church for him midway through, we listened to music that reminded us of our journey throughout pregnancy with him, and other songs that he would have grown up listening to. From Eva Cassidy, to Otis Redding, to Eric Clapton, and Oasis.

Another reason for choosing a church service was knowing this would be the only chance to see our son at the end of an aisle – we wouldn’t ever witness a christening, a confirmation, school choir performances, or a wedding. And on the way in to the church, we walked past every one of our family members and close friends who were able to say hello as Otis was passing them in his coffin, carried in his daddy’s arms.

And as we walked out, to make our way up to the cemetery … they were able to say goodbye.

I’ve questioned myself since, wondering whether it was the right choice to make – I felt somewhat of a hypocrite for something of such importance to be held in a place of worship, where I wouldn’t go to worship, myself. But I always end up reaffirming why it was the right decision – wholeheartedly, completely.

If nothing else, but for the quietness. The second we entered the church, the outside world disappeared. We were in a bubble, where the thickness of the church walls allowed us to focus on nothing but him … it was just us, our family, our friends. And despite it being one of the most devastating hours of my life, it was also one of the most precious. We were protected.

And the abundance of love in the simplest of services so clear, shown easily through our funeral director telling us a few months later that his funeral is the only one she has cried at in her 30 years of directing.

She had never heard words so powerful or felt love so intense.

“It’s like you already knew him and he already knew you. You described his life as though he had been living for 60 years before he died. That’s magical.”

While I do regret some of the people attending, and wish I had asked some others to come along, I know with utmost certainty that he got the send off he deserved. I wouldn’t have done a single thing differently on that day. 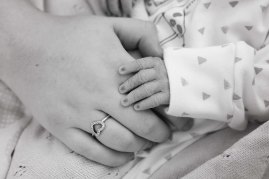 So I look at these pictures of the church in which we said goodbye to our son and I smile as I imagine his tiny blue coffin perched on a stand at this alter … because I am proud. Proud of him, proud of what his short life has brought to the world in abundance, and pretty proud of myself. I am proud; that in the midst of grappling with grief and confusion, I got something – one of the very few things I could do – so perfectly right for my son 💙

Otis Dominic Anthony Cullen; you are missed beyond words and loved beyond measure: born without breath, not without love.